I’ve been reluctant to dip my toe into this pond. Many people with greater experience and education than I have written great articles on this topic. However, perhaps some people who haven’t read those articles will take a few minutes to read this post.

We’ve all heard, and maybe said, the response to #BlackLivesMatter: All Lives Matter. Most people I’ve seen commenting on social media don’t seem to realise that everyone places an additional word at the end of that phrase.

This retort is a true statement. 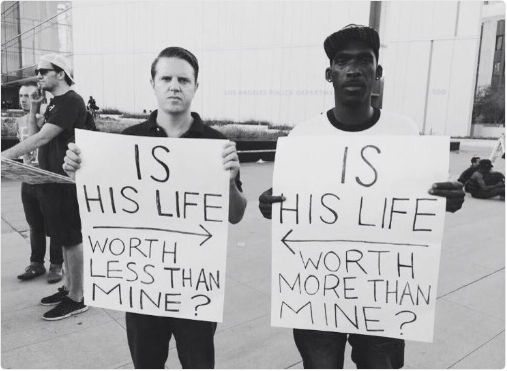 Why do they need to make this statement? Are they seeking to be inflammatory or to make trouble?

Those using the phrase “Black Lives Matter” do so because they’re expressing their impression that many in society don’t think they matter. They feel neglected, so they remind each other and the world that they do matter. They do have value. Of course all lives matter, but there are many people made to feel as though they’re insignificant. Sometimes it’s individuals who feel as though no one notices them. Sometimes it’s whole communities.

Did you notice that little feeling of indignation you feel when you see #BlackLivesMatter and think that you’re being overlooked or devalued? That’s a sensation these people experience as a way of life.

Just telling them that “All Lives Matter” doesn’t remove the negative messages these people have heard for so long.

Why would a large portion of the African-Americans community feel a need to remind the world that Black Lives Matter?

These issues are complex. There is no single simple solution. But all these factors and more contribute to why so many in the black community feel a need to remind the world #BlackLivesMatter…Too.

If you’ve read this far, you might also appreciate this article by Michael Hanegan, 9 Reasons Why My Faith Compels Me To Say #BlackLivesMatter.

You may also be encouraged by this short video from Rick Atchley who preaches for The Hills Church in Fort Worth. This was filmed in the days after the shooting of 5 Dallas law enforcement officers.

And I’m sharing this video below because sometimes we just need to be slapped.

One thought on “Black Lives Matter TOO!”